Wisconsin-born writer Elizabeth Koehler-Pentacoff, who lives in California, has a different perspective than most on one of the 20th century’s most famous political dynasties.

To Koehler-Pentacoff, the Kennedy name brings to mind not the political pomp and

circumstance of Camelot, but rather the memory of a sweet-natured, flirtatious woman with a warm heart, a twinkling eye, that famous Yankee jawline and a harrowing past.

“She was delightful,” said Koehler-Pentacoff of Rosemary Kennedy, the younger sister of President John F. Kennedy, who resided in Wisconsin from 1961 until her death in 2005.

“She loved being the center of attention. She loved bright colors and getting her nails done…She had a sense of humor, she loved a lot of the same things I did – she loved books and having people read to her, she loved exercise, she loved to walk.”

When Koehler-Pentacoff was 4 years old, she met Rosemary Kennedy for the first time in 1962, and visited her regularly for the remainder of her childhood and adolescence.

Koehler-Pentacoff’s aunt, Stella Koehler, known as Sr. Paulus, was a Franciscan nun who worked at the St. Colletta School for Exceptional Children in Jefferson, in the Madison Diocese, where Rosemary was sent to live in 1961 after a failed lobotomy left her largely incapacitated.

In October 2015, Koehler-Pentacoff’s memoir-style book on Rosemary, “The Missing Kennedy: Rosemary Kennedy and the Secret Bonds of Four Women,” was published by Bancroft. In writing the book, Koehler-Pentacoff drew on her aunt’s personal notes and her own recollections, in addition to researching Rosemary’s life at the John F. Kennedy Presidential Library and Museum in Boston. She also interviewed members of the Shriver family, the children of Rosemary’s sister, Eunice.

Her purpose in writing the book was to start “a Rosemary revolution” on behalf of those who, like the eldest Kennedy daughter, suffer from mental illness.

“We need to have a Rosemary revolution and really care about people no matter what the disease that they have — and mental illness is a disease,” she said.

Diagnosed in her childhood as “mentally retarded,” in the terms of the time, Rosemary 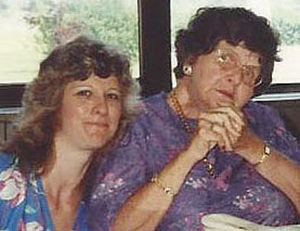 grew up with learning disabilities but became volatile as she entered her twenties. In 1941, her father, Joseph Sr., arranged for doctors to perform a lobotomy on his daughter, hoping it would calm her violent outbursts. Instead, it left Rosemary with the mental capacity of a child.

The 23-year-old was then shut away in Craig House, a private facility in upstate New York noted for its famous residents, including Zelda Fitzgerald and later Frances Seymour, mother of Jane Fonda. Joseph Kennedy had been told that visits from family would be too much for his daughter to endure, so Rosemary’s siblings and mother were not aware of her condition or her whereabouts.

She didn’t have a visitor for 20 years, and there is evidence Rosemary was abused at Craig House, said Koehler-Pentacoff.

Joseph Kennedy transferred his daughter to St. Colletta in 1961 at the advice of his friend, Cardinal Richard Cushing, archbishop of Boston. The Franciscan-run facility was founded in 1904 and had recently changed its name from the “Institute for Backward Youth” in an effort to treat its residents with greater dignity.

It was then that Sr. Paulus and other members of her order began caring for Rosemary, and that would prove to be the beginning of a brighter period in the woman’s life. In 1962, in an ironic twist, Joseph Kennedy suffered a stroke and became incapacitated. Rose Kennedy took over care of her daughter.

“Everything changed once Rose learned that her daughter had a lobotomy, where she was,” said Koehler-Pentacoff. “The moment that happened and she learned of the decree of keeping her hidden, she just reversed that completely, and said, ‘Oh no, get her out in the community. Take her to church, take her shopping. Let her get out and about.’ That was the ticket for Rosemary to suddenly be reintroduced into society without any stigma, with love. She became a whole different person.”

Treated with love and respect by Franciscans

For the entirety of her childhood and adolescence, Koehler-Pentacoff and her parents [su_pullquote align=”right”]Where to hear the author Elizabeth Koehler-Pentacoff, author of “The Missing Kennedy: Rosemary Kennedy nd the Secret Bonds of Four Women,” is scheduled to speak at the following venues: Friday, May 13, 12:15 p.m., Library Association, Oshkosh

Thursday, May 19, 11:30 a.m., Three Pillars, Village on the Square, Dousman.[/su_pullquote]visited Rosemary every week.

“She came to our houses, our celebrations – we were very fortunate, and I believe she was fortunate, too,” she said.

Rosemary benefitted from the “gentle, loving care” that Sr. Paulus and the other nuns provided her, said Koehler-Pentacoff.

“She had a lot of anger in her and she would still be uncontrollable and in uncontrollable rages. Sr. Paulus had her hands full, but I noticed how she treated Rosemary – with love and respect, and stayed calm through everything,” she recalled. “It taught me, and everyone around them, how to be. I just thought it was such a gift, that whole incredible love that was around Rosie. She gave off love, and everybody around her gave off love, and it was such a joy to be there (at St. Colletta).”

After Joseph Kennedy’s stroke, Rosemary’s siblings began to make regular trips to Wisconsin to visit her. Her sister, Eunice, she added, was “very much Rosie’s advocate,” and it was Eunice’s concern for Rosemary and her experience with the inclusive environment at St. Colletta that inspired her to found the Special Olympics.

“As she visited Rosemary more often in the early ‘60s at St. Colletta, she observed other residents on the campus and noticed that they tended “to be a little bit overweight and kind of lethargic, and didn’t have a whole lot of opportunity for strenuous physical activity,” said Koehler-Pentacoff. The name of her now-famous organization was inspired by a flyer on the grounds that described those with intellectual disabilities as “special in the eyes of God.”

With the help of Sr. Paulus, Rosemary – who had the Kennedy affinity for physical activity – relearned her swimming skills after her lobotomy, and her family paid for an indoor pool to be built on the grounds that all the residents could use.

Like Rosemary Kennedy, Sr. Paulus was also from a large Catholic family – but that was where their similarities ended. Born Stella Koehler in Dousman, she grew up poor, helping her parents and nine siblings work the family farm.

“She ended up pretty much raising my dad, the youngest,” said Koehler-Pentacoff.

She also helped her mother care for the local church, St. Bruno. One summer, the parish priest brought in nuns from Holy Hill to teach Bible school and needed someone to drive them back and forth each day. Stella, who loved to drive, volunteered.

It was during that time spent driving the nuns Stella discovered her own vocation, said Koehler-Pentacoff — what Sr. Paulus would later describe to her niece as “an overwhelming desire, beyond anything, to want to serve God, and to want to be a nun.”

The family struggled financially, and her parents were reluctant to let her leave the farm to pursue religious life, but Stella was determined, said Koehler-Pentacoff. Sr. Paulus’ vocation found fulfillment in caring for those who were often neglected and forgotten by society — like Rosemary Kennedy.

“She was so happy, all of her years as a nun, but her happiest time was when she was with Rosemary,” said Koehler-Pentacoff. “She just had a knack with all the special people she took care of. She was just a warm soul.”

Sr. Paulus died in 1996 at the age of 86, after being diagnosed with cancer. Rosemary lived until 2005, when she died of natural causes.

Rosemary Kennedy’s legacy has been considerable, especially in light of the fact that she lived most of her life entirely shielded from the public eye. Koehler-Pentacoff hopes Rosemary’s experience, as detailed in the pages of “The Missing Kennedy,” will help spark an open dialogue on mental health.